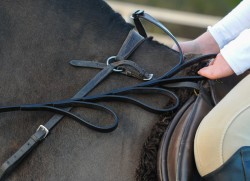 They are great thanks so much.
Got the reins yesterday, Jack had his lesson today, did really well with them, we will take some pics next week and hopefully video !!!