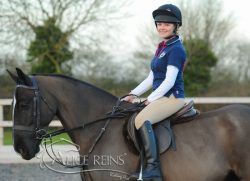 I thought I would share how I came up with the idea of a business like Alice Reins.

I was always being asked about Alice and her hand and was always being told how well Alice rides and that you would never know about her hand!  What a compliment for Alice who is now quite an established rider and I am so proud of her!  People have often asked about Alices’ reins too over the years but I never really gave it much thought. I just designed and had them made so that Alice was able to ride like any other child. I recently got to thinking that maybe the reins could help other children who are similar to Alice.

A short time ago I made a short video of Alice riding Poppy on a very cold winters day.  The video showed Alices’ reins and I explained how they worked and also showed how Alice went about hooking her left hand in each loop.

I decided one day to put this video on just one horse group page on Facebook and to my astonishment, within 2 hours I had over 350 likes and about 170 enquiries!!  I was totally shocked at this response and very flattered and proud at some of the comments that had been made about Alice and indeed her reins!!

It was then that I was asked for adaptations of Alices’ reins by people who had lesser grip i.e. arthritic or people who had suffered a stroke.  I was also asked for driving reins in the same design.  I was approached by 2 RDA centres with regard to Alices’ reins.  People enquired as to whether Alices’ reins could be used for novice riders to teach them correct hand position in walk trot and canter.

So I have now decided to set up a brand new business which is called “Alice Reins”, I hope to be able to help other children or adults in a similar situation.  I also want to help children or adults who need tailor made reins just for them.  I hope I can 🙂 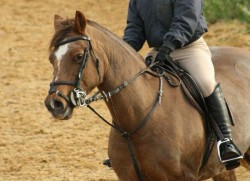