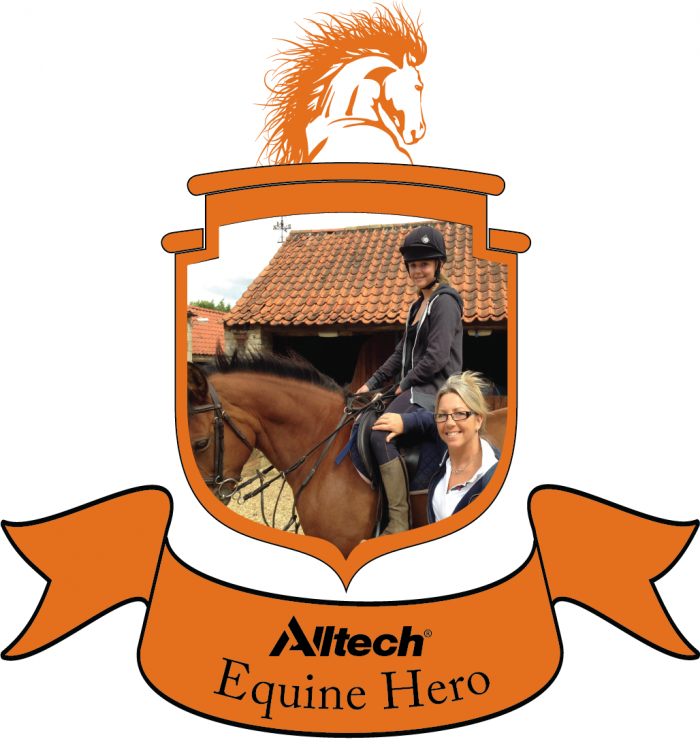 I cannot put into words how I felt when my friend of many years Michele Gaskin sent me a message on Facebook asking me to call her because she had some very exciting news for me. I called Michele only to be told that she had nominated me as her Equine Hero!  Michele wrote a story about me and my daughter Alice who rides with one functional hand.  This is the story which Michele sent in which made the final 3 in the judging process.  It was then down to the general public to place their votes and WE WON the Alltech Equine Hero Award. How fantastic!

Alltech has just hosted the World Equestrian Games in Normandy and are a global company, this award means so much as it helps us spread the word of Alice Reins so that we can help more people to ride. Click here for Alice Reins testimonials.

August’s public vote has now closed.
Congratulations to our August Alltech Equine Hero Award winner Jacqui Edwards! Michele Gaskin from the United Kingdom has nominated Jacqui Edwards as her Equine hero! Michele explains that Jacqui is an inspirational and dedicated mother to her daughter Alice.Alice is passionate about horses and it has always been her dream to be able to ride a horse. Unfortunately this was difficult for Alice as she was born with only one functioning hand. Nonetheless Jacqui was determined to get her daughter riding the way she wanted to, and designed a type of rein which Alice would be able to use. This special set of reins helped Alice to achieve her dream of riding a pony and allowed her to go on to win lots of local pony events!

After seeing the success of her rein design, Jacqui decided that she wanted to help more people and set up a company called Alice Reins. Through this company she sells her special reins for those with lesser grip, such as people suffering from arthritis, those who have had a stroke, or even people who have carpal tunnel or other similar ailments!

Michele finishes by explaining that she “feels that Jacqui is an inspiration and has given much hope and happiness to others through her clever thinking of how to overcome the obstacles faced for those wishing to ride who have disabilities”. This is why Jacqui Edwards is Michele’s Equine Hero!

Thank you for reading our blog, for more information about Alice Reins please visit our website www.alice-reins.co.uk